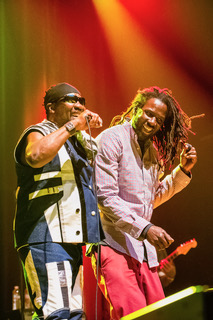 Junior Toots, son of the legendary Toots Hibbert of Toots & The Maytals was born and raised in St Mary, Jamaica. With his father Toots as a great successful mentor, Junior Toots began singing on stage at a young age touring internationally with his father. He has now been a mainstay reggae artist on the world stage for the last twenty years. He has an ever-growing fan base as he has been captivating audiences of all ages far and wide with his electrifying high-energy performances, soul-filled vocals and socially relevant lyrics. His music is generally up tempo ska and reggae which generates great crowd response.

In the midst of the current social turmoil, Junior Toots stays positive and focused on his music career and on being the change he wishes to see. From 1997 until 2020 Junior Toots toured with his father Toots and the Maytals, performing some of his own songs such as “Holding Firm,” and “Jah Give Us Victory,” as well as doings some of his father’s songs such as “Funky Kingston” and “54 46”. He has also been steadily recording his own material as well as working on collaborations with other artists. Junior Toots has released five albums called Crown of Fire, Reggae Got Soul, Junior Toots and the Stronghold, A Little Bit of Love and Guidance Star. A Little Bit of Love hit #10 on the NACC World Charts. Junior Toots has also released many singles such as “Heart of the City” with GRW, “Physically Spiritually”, “His Name” with Akwerius and “Sweet and Dandy”, which was a tribute to his father. The idea to record “Sweet and Dandy” came from Toots Sr. who produced the track for his son which was released on December 8, 2020 to mark the day that would have been the 78th birthday for the recently transitioned Toots Hibbert or “Nyah” as he was called by his family. Other singles include “Green Lights” with GRW “Love The Herbs” and “Love Is The Best”

Junior Toots has performed on many festivals including The Sierra Nevada World Music Fest, Reggae on the River, Reggae on the Mountain, San Francisco Reggae Fest, Bethlehem Pennsylvania Steal Fest, Reggae in the Hills, Musik Fest and The Seattle Hempfest.

Having the essence of Jamaica, a strong love for Jah and the Rastafarian culture, Junior Toots expresses the wisdom of his life-learning’s in his music and his live shows and in everyday life.

“I aim to continue spreading peace among people of all creeds, religions and color through my music and philanthropic missions. After witnessing so much violence in my homeland, I vowed at an early age to promote goodness, fairness and equality in all I do and with those I am blessed to work with. It’s what drives the music I write and present to the world,”…… Junior Toots