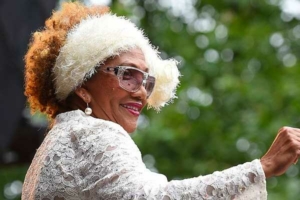 Marcia Griffiths is currently one of the top reigning reggae artists in the world. She is the undisputed queen of reggae. As one of the original I –Three’s vocalists with the great Bob Marley, Marcia is keeping the spirit of Bob Marley and the Wailers fresh and alive. She is a direct link to the prophetical, proverbial king of Reggae – Bob Marley. In her shows she always covers some Bob Marley songs with class and sincerity, as one of the family.

Over the summer, 2010 Marcia Griffiths was all over the map on the festival circuit. She did a historical performance at Reggae in the Desert in Las Vegas on June 12th, greatly uplifting the energy of the festival. Her performance on the Sierra Nevada World Music Festival June 20th stood out very strongly as a highlight of the festival. July 31st at Reggae on the River she also stood predominant, and on the Monterey Bay Reggae festival she was also top ranking, in fine form. Her glory and positive energy on all of these cornerstone California festivals was truly full of love and joy and happiness. Marcia Griffiths is surely a good exemple of what true reggae music is supposed to embody.

May 15th Marcia attended a huge awards ceremony in Jamaica where she received an award for the greatest achievements in the music industry. Marcia is consistently very busy doing recording sessions, shows and tours in the Caribbean and beyond. She is always on the road. Last weekend, for example she performed in Toronto, Canada and Saturday, August 28th she performed on a festival in Spain. Marcia is regularly on the Rotterdam festival and many other festivals in Europe. May 12th she was featured on a show in Jamaica for the European leaders and prime ministers. July 2010 she toured the eastern U.S. with Tanya Stevens. On the late annual U.S. Sunsplash Tour with Tony Johnson, Marcia used to do the tour every year.

Marcia’s Love is Automatic single with Busy Signal is currently number one on the England and European charts. Another of her big current songs that gets a lot of radio airplay is What Goes Up, Must Come Down which is a combination with her and Queen Ifrica. She also has out a single called A Beer and a Girl, which is a song about the memories of life in Jamaica in the older days. This is one of the stronger songs on her live set. She has another hit playing out there called There is a time for Wars, which is a combination with Beres Hammond. Marcia is also currently recording a track for the new Third World album. Marcia is a busy woman.

On the near horizon, Marcia Griffiths has a new double CD finished and ready for release in the near future. This CD is called, Marcia and Friends. The CD features combinations with singers Barrington Levy, Diana King, Richie Stevens, Etana, Bob Andy and John Holt, amongst others. For DJ’s on Marcia and Friends, there are combinations with Gentleman, Damian Marley, Beenie Man, Bounty Killer and U Roy.

Marcia Griffiths is a special treat, bringing us inspired reggae music, backed by world class musicians and excellent background vocalists. Her backing vocals are her son Taff, who has a beautiful voice and Ceby who is also an excellent vocalist. Marcia Griffiths puts on a show worth going out for.

The longest, hardest and most consistently working artist in the history of the Jamaican Music Industry is the Empress of Reggae music, the most Honorable Marcia Griffiths, OD, first Lady of Songs, Female Vocalist Supreme.

In a career spanning 40 years to date and still going strong, she hits high points internationally as a soloist and as a duo with Bob Andy, as Bob and Marcia. She has toured the world as a member of the I-threes with Bob Marley and the Wailers. Subsequently as a soloist she hit the Billboard chart with “Electric Boogie Song” and created a world class dance, the Electric Slide. This super star has been recording and performing ceaselessly.

At a recent reggae concert in South Florida, Marcia Griffiths demonstrated the same level of performance she has been known for over the years, as both a solist and a member of different groups. She displayed, in combination with Reggae rapper Cutty Ranks, on their duet of “Fire Burning”, all the zeal and elements that go into dancehall music. Marcia exibits the same exuberance when performing her international crossover hit “Electric Boogie.”

Marcia Griffiths has been performing and recording as a top class artist for four decades. She says “I started singing professionally as a vocalist in 1964, for Byron Lee and the Dragonaires band.” Her recording years started soon after, at Coxsone Dodd – Studio One where she recorded her first hit “Feel Like Jumping.”

It was while recording at Studio One that Marcia teamed up with Bob Andy on ‘Really Together,” the first of many duets that the two would record. “Luckily for me, Bob Andy was always a strong and wise person”, says Marcia. “He was there for me in the early days and that gave me confidence”. Then the pair moved to the Harry J Label, hitting the British, as well as the International charts with “Young Gifted and Black” and “The Pied Piper,” recording two albums of the same titles.

Marcia Griffiths & Bob Andy Bob & Marcia @ Morgan’s Harbour Following that duet success, she went solo again on the High Note label with Reggae’s sole established female producer – Sonia Pottinger – hitting with several songs including her own original “Stepping Out of Babylon.” and releasing two albums “Naturally” and “Stepping”. When asked to express her opinion on female reggae vocalists, Marcia said “It’s been a rough, tough job standing up as a woman in this business, that’s why my album before “Land of Love” I chose to call “Indomitable”, which means not easily discouraged or defeated. My views on women in reggae are positive; most of the new or upcoming female singers in reggae started out singing my songs before doing their own originals. I feel very good about that; to know that I have influenced my people positively.”

I-THREES – Judy Mowatt, Rita Marley and Marcia Griffiths Ten years after entering the music business, Marcia united with Judy Mowatt and Rita Marley to form the I-Threes as an important part of the Bob Marley entourage. “Words are not enough to express my experience with the I-Threes and Bob Marley and the Wailers”, says Marcia. “What a blessing to be so privileged…to have shared this experience”.

Shocking out with the electric boogie, doing the electric slide. Marcia gained solo international recognition with her monster hit “Electric Boogie.” This song was first recorded in 1982 and went to the #1 spot on the Jamaican charts. Sales continued over the years and in 1989, a Washington, DC Disc Jockey started playing it regularly and in no time, it caught on and hit the station’s regular rotation list.

A new dance, the Electric Slide, was created from the “Electric Boogie” song and as a result, sales soared and the “Electric Slide” became popular all over the U.S. The song and dance have been featured on the Oprah Winfrey and Phil Donahue shows, and the video has been aired many times on the Black Entertainment TV (BET) and other nationwide music networks.

Marcia Llyneth Griffiths was born on November 23, 1949 to Joseph and Beatrice Griffiths. The family hailed from a poor section of West Kingston, but as bad as things were, Marcia considered those days glorious, because there was always one thing in abundance – one thing that made them the wealthiest family in the world – one thing that no one could take from them… Love.

Marcia as a teenager attended Kingston Senior School, and was a zealous member of her church choir. In fact, she was always taking part in some school concert or play. She loved to hang out and sing with friends, often times sneaking out of the house after her parents had gone to bed. It was during one such nightly excursion, that the slim fifteen year old beauty managed to get herself discovered.

Philip “Boasie” James lead singer of the Blues Busters vocal duo was visiting his girlfriend, who lived next door to Marcia, and heard this lovely voice floating through the air. He could not believe his ears, and subsequently took Marcia straight away to Byron Lee and insisted that this song-bird be included on the upcoming talent show to be held at the Carib Theater in Kingston. Marcia remembers that Byron was upset with “Boasie” for coming to interrupt his well planned program schedule and insisting that this “nobody” go on his show.

In 2004 at the dawning of the 21st century, the most influential female artist in Jamaican popular music, Marcia Griffiths OD is briskly fanning the flames of Reggae Music. Working in the studio, releasing records and touring. Marcia continues her mission of spreading the message in the music into the new millennium.

In between studio sessions, Marcia has been on the road. In the past two years she has enjoyed a successful tour of the USA with Beres Hammond and Freddie Mcgregor. Traveling to England with Beres Hammond, they performed an extensive tour with the same overwhelming results. Forward on a yard, Marcia shared the stage with Boyz II Men at the massive Spring Break concert for MTV in Negril Jamaica. Returning to the US, she performed in Orlando, Florida, (Disney World) Universal Studio, at the opening of the Bob Marley Museum. Sharing the bill were the I-Threes, Ziggy Marley and Inner Circle. Moving on up to New York, Marcia displayed two memorable shows with Beres Hammond and Buju Banton at Carnegie Hall and Madison Square Garden. Going further north Marcia worked in Toronto and Montreal with John Holt and Ken Booth. Again in the USA with Bob Andy as the Legendary duo, they performed at the Bob Marley Day Celebration in Los Angeles, before heading down south to perform at the historic Reggae meets Rocksteady showcase in Miami. Next Marcia toured with the legendary Wailers Band. Then the I-Threes were off for shows in Italy, Europe and South Africa. Returning to Jamaica, the I-Threes shared the stage for two shows with R&B legends Gladys Knight and Patti LaBelle. In November 2002, along with John Holt, Ken Boothe and Mikey Spice, Marcia produced an historical performance with the Royal Philharmonic Concert Orchestra at the Wembley Arena, Birmingham and Aston Vill Leisure Centre, Middlesex. Since then Marcia has performed in New York, Toronto, Atlanta, Miami and Jamaica.

The driving force of the Reggae Empress is fueled by her inner desire to serve the people of the world with sweet reggae music. She said “ Music alone shall live, and it’s not only for the money, but the satisfaction I get from doing the work that I love, that is what really keeps me going everyday”.